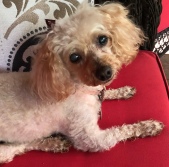 Through the years I’ve written blogs about the lessons I’ve learned from interacting with the most precious toy poodle God may have ever put on this earth. She was a birthday gift for my wife Kelli in 2005 and her name was Princess (although I’ve bestowed a plethora of nicknames on her along the way, such as Pee Poo, Pretty Girl, Jelly Belly, Fluffy Butt, Iso Purty, Mocha Poo, and Coca Poo). Time and disease took her away from us last night. The pain of the loss is only eclipsed by the immeasurable joy she brought to everyone and the many hilarious lessons she taught us along the way (yes, you can even learn from a dog if you have a teachable spirit).

She taught us to be ourselves because she certainly was one of a kind (and with a name like Princess she was quick to remind us of that fact), to treat everyone like you haven’t seen them in years (even if it’s only been a few minutes), to watch what we put in our mouths (literally and spiritually) because shiny things like tinsel don’t always stay where you put them, to remember that if you go around in circles long enough, you will probably get dizzy and hit a wall (if you want to change your destiny, change your course), or to tirelessly seek after what you want such as a bit of coke in a trash can, a piece of already chewed bubble gum, or a third set of treats as if we wouldn’t remember (or the Lord while he may be found).

As I dug a hole in our back yard to prepare to bury her (one of the most excruciatingly difficult things I’ve ever had to do and something only a pet lover would understand), I had the most unchristian and unlike Pee Poo thought. I could think of many people who should be put in that hole instead of her (of course, and I’m sorry here for the transparency, they are such butts they would never fit in the hole). I’ve been on this earth long enough to see the best and worst in people (Christian or not) and it’s hard, even as a spiritual leader, to not become more jaded by the bad behavior than inspired by the good. But that’s why we’ve been given God’s grace and mercy. We apply it to ourselves but are just as motivated to give it to others.

Perhaps Pee Poo’s final (and best) lesson came as she was lying on her special St. Louis Cardinals Fred Bird bed (for dogs) gasping for breath and looking incessantly for those who loved her. Plainly stated, she lived and loved without ceasing to the end. One thing that’s great about dogs is that, as the Apostle Paul taught in 1 Corinthians 13, they keep no record of wrongs. They function with a certain time and hurt amnesia. They seem to understand that people are people and they’re going to do what they’re going to do, and that we can’t control how people treat us, but we have total power over our response. There’s no creature under heaven that better embodies the virtues of loyalty and faithfulness even when those same virtues are not reciprocated.

It’s impossible to walk through the rooms of our house and not see her everywhere. I can still see her eating in the laundry room, rubbing her back on the downstairs carpet, barking at me to place more treats on the fireplace mantel, running around the pool table at full speed, jumping on my chest to say good night, sitting dutifully beside Kelli after multiple back surgeries, follower her all over the house, or lying next to her desk as her mentor and study buddy (of course she was there ultimately for the treats Kelli kept in her desk drawer). In addition to the many doggie beds placed throughout the house, our home is filled with baskets of toys and dozens of doggie sweaters (three of them of course are St. Louis Cardinals doggie jerseys). No, it won’t be hard to remember her and honor the blessing she was to all of us, but I think the best way to appreciate her is to somehow develop and maintain that hurt amnesia and learn to love without ceasing to the end, just like the world’s greatest Poo.