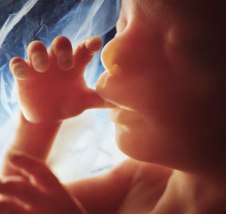 The Bible is filled with clear references to the viability of life in the womb and God’s value for it. Psalm 139:13 says, “For you created my inmost being; you knit me together in my mother’s womb.” John the Baptist literally jumped for joy inside his mother’s womb at the greeting of Mary (Luke 1:41). The Lord declared to Jeremiah, “Before I formed you in the womb, I knew you, before you were born, I set you apart” (Jeremiah 1:5).

Ronald Reagan argued, “Simple morality dictates that unless and until someone can prove the unborn human is not alive, we must give it the benefit of the doubt and assume it is (alive). And, thus, it should be entitled to life, liberty, and the pursuit of happiness” (The Conscience of a Nation). Recent scientific evidence supports the viability of life in the womb by now documenting the perception of the human heartbeat at 16 days. The science, combined with the fact that the overwhelming majority of abortions have nothing to do with the health of the mother, rape, or incest, is cause for reflection, action, and certainly a rejection of late term abortion.

After 63 million abortions since Roe v. Wade in 1973, it is time for the spiritual conscience of the nation and particularly the people of God to awaken. This loss of life is over 46 times greater than all the lives lost in all the wars ever fought as a nation (1,354,664). The lost earning power and subsequent buying power of the aborted work force is estimated to be 90 trillion dollars, and the lost tax revenue at 22.5 trillion dollars (enough to pay off the current national debt in its entirety). God only knows how many problem solvers, scientists, inventors, and spiritual leaders have been lost to the modern-day incarnation of the spirit of Pharaoh and Herod who ordered the death of the infants to destroy any threat to their power (Exodus 1:15-22; Matthew 2:16-18).

If we are to address this issue biblically and effectively, we have to be reminded that abortion is not a political issue or a social issue, but a sin issue. The Bible still commands, “Thou shalt not kill” (Exodus 20:13). Abortion is ageism at its worst denying a child even the basic right to life. The spirit of death that drove Herod has now shown up in places like New York, Rhode Island, and Virginia where legislators and governors pushed for (and some succeeded) in paving the way for abortion up to the point of birth (and beyond if the embattled governor of Virginia had his way). It’s baffling that people (and even believers) who decry child poverty, lack of clean water, limited education or healthcare, or even border detainment of children have nothing to say about the execution of the unborn.

How we personally deal with abortion as believers is a great indicator of the condition of our own conscience. Advocating for or justifying the slaughter of the unborn indicates the hardened or seared conscience (1 Timothy 4:2). Brushing off abortion as a political or social issue demonstrates an insensitive, darkened, or damaged conscience (Ephesians 4:19). Being disgusted by this culture of death and attack on the most defenseless among us to the point of raising one’s voice and intercession indicates a healthy, working, and good conscience (1 Timothy 1:18-19). Let us take our functioning conscience and pray for our court system, lift up our voices in opposition to this wickedness, rebuke the demonic spirits behind this slaughter, support our foster and adoption systems, get behind legislation that seeks to limit abortion such as heartbeat laws, and provide biblical counseling and healing for those who have experienced the trauma of having an abortion.